Welcome to the Kalliope Collection.

In 1974, a poetry study group that met weekly at the Unitarian Universalist Church to read and discuss contemporary women’s poetry organized itself as the Jacksonville Women’s Poetry Collective. Before founder and leader Diane O’Donnell moved away and the group disbanded, they managed to publish a limited edition of a collection of members’ poems called Butter and Brass. They dedicated to the work Marge Piercy, from whose poem “The Woman in the Ordinary” they’d borrowed the title.

In 1977, the group reorganized under the auspices of Florida Junior College’s Center for the Continuing Education of Women and decided, with the College’s assistance, to apply for state funding in order to facilitate the creation of a journal devoted to the work of women artists and writers. In 1978 the Florida Arts Council awarded them a grant of $5,000, which the FJC matched, and Kalliope, A Journal of Women’s Art was born. The name Kalliope was chosen because “the muse of epic poetry represents the standard of excellence we are seeking, and the progress of women in the arts, both individually and collectively may be seen as a kind of epic journey.” The first issue, edited by Betty Bedell, came out in February of 1979.

Over the course of its thirty year run, Bedell was succeeded as editor by Peggy Friedmann, Sharon Weightman, Mary Sue Koeppel, and Margaret Clark. Kalliope published interviews with and sponsored speaking events by major authors - including Marge Piercy, to whom the original JWPC had dedicated their poetry collection - and produced special issues dedicated to featuring the works of women over sixty, women under thirty, and artists and writers with disabilities. By the time the magazine marked its twentieth anniversary, it had been reviewed on NPR and was receiving almost two thousand submissions each year from contributors across the United States and from countries as far away as Australia, Pakistan, and China (from which the poet’s submission had to be hand-carried to Hong Kong and then mailed). Kalliope even took to the air on Stereo 90, where every week for years the members read the issues as part of a twice-weekly segment for the visually impaired, and for which they won a national award from the National Association of Reading Services. In 1993, the magazine founded the Sue Saniel Elkind National Poetry Contest, which offered a first prize of $1,000 and was judged by acclaimed poets such as Carolyn F Forché, Joy Harjo, and Maxine Kumin. 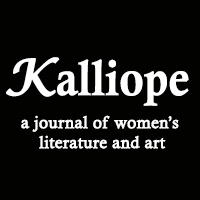