Welcome to the Writer to Writer Collection.

Writer to Writer is a series of interviews with local and national authors which ran for over a decade after launching with six pilot episodes (including interviews with science fiction and fantasy writer Alan Dean Foster and mystery writer Stuart Kaminsky) in 1994. The series started when Kathleen Clower, then the Director of Television Production for Florida Community College at Jacksonville, became interested in the Florida First Coast Writers Festival. An annual event sponsored by the College which offered writing and publishing workshops, the Festival was founded in 1985 by Professor Jack Surrency and but had come under the direction of Professor Howard Denson by the early ‘90s. After attending one of the Festivals, Clower was impressed by the caliber of the speakers being brought in, and thought it would be worthwhile to create an interview series similar to Worth Quoting featuring them. With the cooperation of Denson, Clower reached out to several of the authors schedule for the 1994 event, and convinced them to participate. Once the authors had committed, Clower built a simple set on which Writer to Writer could be filmed and then found interviewers who were familiar with the authors’ works and had read at least one of their books, including Mary Sue Koeppel, Carol Grimes, and Charlie Patton of The Florida Times-Union. Eventually Clower herself became the Festival coordinator, which made lining up interviews even easier, and she wound up producing over 50 episodes of Writer to Writer.

Although Writer to Writer was initially intended for cablecast on Channel 26, the educational channel which the College began operating in 1980 to host its telecourses, some of the programs achieved greater status. Clower had a relationship with the Adult Learning Service (ALS) of PBS through some of the other programming she did for FCCJ, and when her contacts learned of the series they selected a number of programs to distribute to colleges, universities, and PBS stations nationwide by satellite feed.

This collection represents the majority, but not all, of the interviews filmed for this series. If you have information regarding existing copies of interviews with speakers not represented here, please contact Jennifer Grey at jennifer.grey@fscj.edu. Opinions and views of the speakers in this series do not necessarily represent those of Florida State College at Jacksonville. 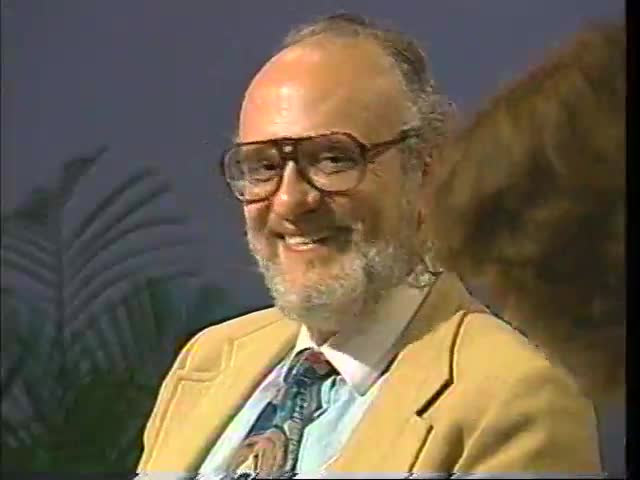 Title
Alan Dean Foster, Kevin Robinson & Michael Seidman: Getting Published.
Abstract/Description
Three successful authors elaborate on their experiences getting their writing published and give their advice to aspiring authors. The authors agree that publication is a long and difficult process full of rejection and frustration. However, taking advice from editors and other authors to improve the story and persevering until the story is accepted will help aspiring authors succeed.
Date Issued
1994
Identifier
FosterRobinsonSeidman, fscj:13513
Format
Video file 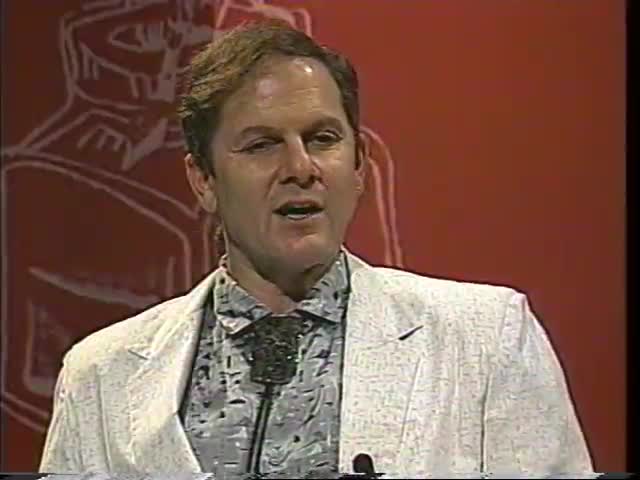 Title
Alan Dean Foster: Writing Science Fiction and Screenplays.
Abstract/Description
Author Alan Dean Foster explains what led him to become a science fiction writer. He discusses his perspective on the genre of science fiction writing, including his experience as a screen writer and writing books based on television shows and movies.
Date Issued
1994
Identifier
AlanDeanFoster
Format
Video file 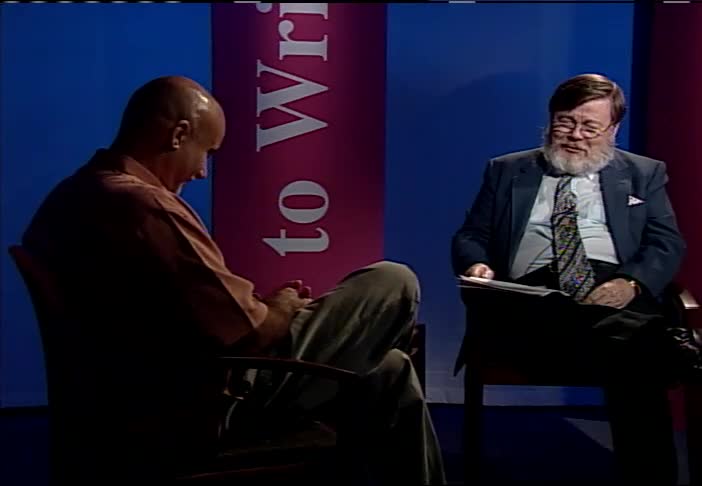 Title
Arthur Rosenfeld: Writing From Experience and Disorder.
Abstract/Description
Novelist Arthur Rosenfeld, host of the hit (60 million households) national public television show "Longevity Tai Chi with Arthur Rosenfeld,"discusses his personal history and how he was inspired to become an author. He also discusses the genre of magical realism and how it applies to his work.
Date Issued
2002
Identifier
ArthurRosenfeld, fscj:13502
Format
Video file 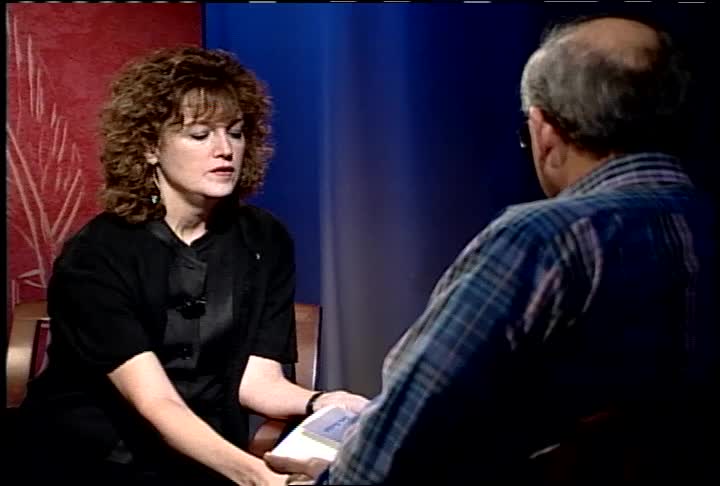 Title
Carla Hartsfield: The Music of Poetry.
Abstract/Description
Carla Hartsfield began her career as a musician but she wanted a non-musical way to express herself so she started to write poetry in addition to her other creative pursuits. In this interview she reads multiple selections of her poetry. Episode #: ?
Date Issued
2001
Identifier
CarlaHartsfield, fscj:13504
Format
Video file 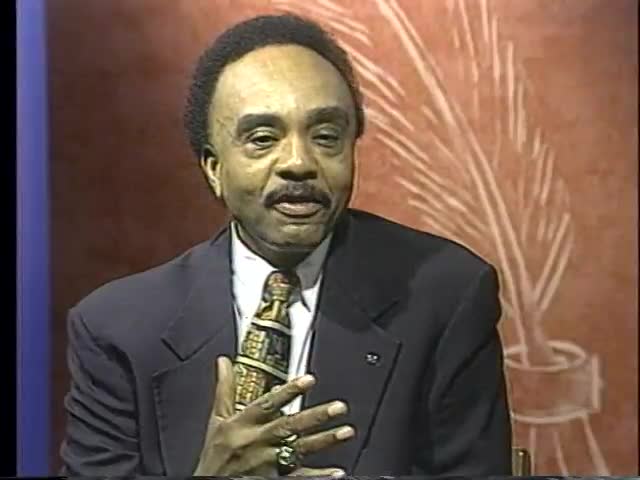 Title
Clifton Taulbert: Front Porch Stories.
Abstract/Description
Clifton Taulbert, author of Once Upon a Time When We Were Colored, discusses his new book, Eight Habits of the Heart ,and the significance of the front porch in Southern culture. Mr. Taulbert also reminisces about his relationship with Bobby Kennedy.
Date Issued
1999
Identifier
CliftonTaulbert, fscj:13503
Format
Video file

Title
Connie May Fowler: The Influence of Family.
Abstract/Description
Author Connie May Fowler reveals that initially she wrote to overcome the unfortunate circumstances of her childhood. Those circumstances inspired her to write Before Women had Wings which was adapted for television and starred Oprah Winfrey. She also discusses her experiences with Hollywood, how sense of place is an important theme in her novels, and her book Remembering Blue.
Date Issued
2001
Identifier
ConnieMayFowler
Format
Video file 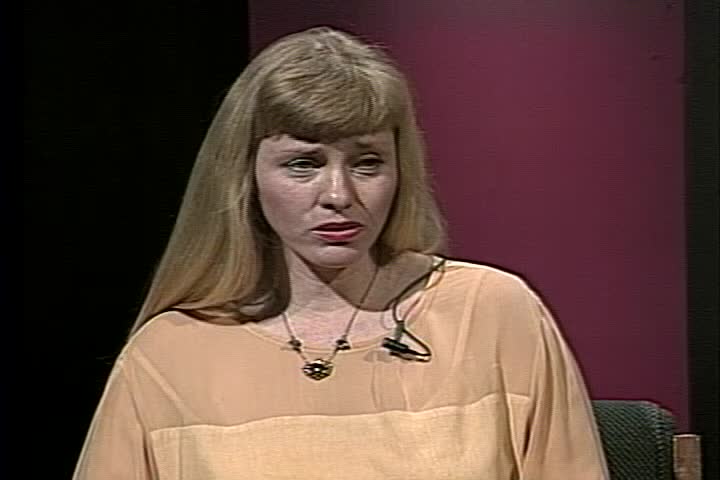 Title
David Hopes: Poetry, Playwriting and Essays.
Abstract/Description
Author and UNC-Asheville professor David Hopes discusses his essay collection A Sense of the Morning, the relationship between poetry and essays and his theory that poems as part of essays are less intimidating to readers than stand-alone poems. The author reads aloud selections of his own poetry. Mr. Hopes also discusses the publishing company he founded. Episode #: 27
Date Issued
1996
Identifier
DavidHopes, fscj:13505
Format
Video file Title
David Kaufelt: From Madison Avenue to Mysteries.
Abstract/Description
David Kaufelt, author of the Wyn Lewis mysteries and founder of the Key West Literary Seminar, discusses his career and what led him to become a novelist. He also relates his experiences with publishing and how the industry has changed over time and discusses writing from the point of view of a female protagonist. Episode #: 9
Date Issued
1995
Identifier
DavidKaufelt, fscj:13506
Format
Video file Title
David Poyer and Lenore Hart: Writing - A Family Affair.
Abstract/Description
Novelist power couple David Poyer and Lenore Hart, who bring their small daughter to this interview, discuss the realities of raising a child while also individually pursuing careers as writers. They also discuss their recent works, the state of their careers and the travel related research they do for writing. Episode #: 7
Date Issued
1994
Identifier
PoyerHart, fscj:13536
Format
Video file 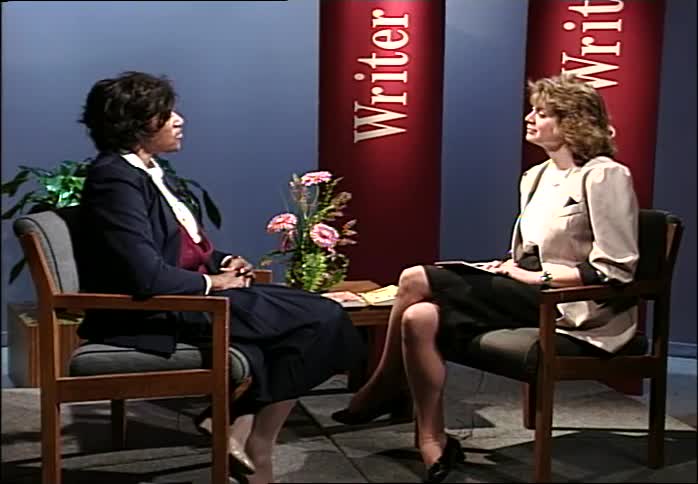 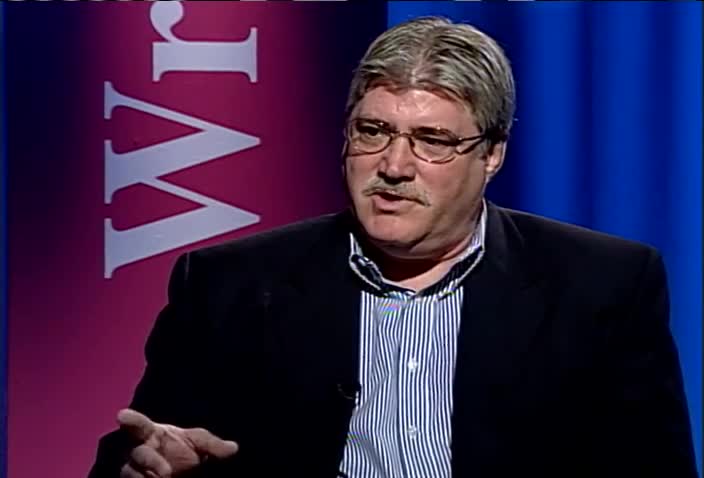 Title
Doug Marlette: Sacred Cows and Holy Hamburgers.
Abstract/Description
Editorial cartoonist, novelist and Pulitzer Prize winner Doug Marlette discusses his novel The Bridge and how his personal life and family history inspired his novel. He also explains how the political nature of his cartoons have created controversies that have followed him for his entire career. Episode #: ?
Date Issued
2003
Identifier
DougMarlette, fscj:13510
Format
Video file 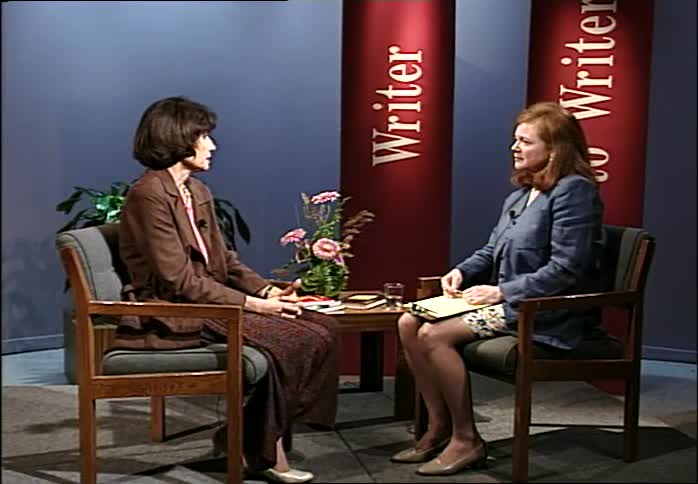 Title
Dr. Stuart Kaminsky: The State of the Mystery.
Abstract/Description
Dr. Stuart Kaminsky, author of the Tobey Peters and Inspector Rostnikov series, discusses and compares the main characters of the many mystery series he writes. He asserts that imagination is essential for writers who are writing about subjects or situations outside of their own experiences and that a writer must balance imagination with research. Episode # 21
Date Issued
1996
Identifier
StuartKaminsky, fscj:13602
Format
Video file 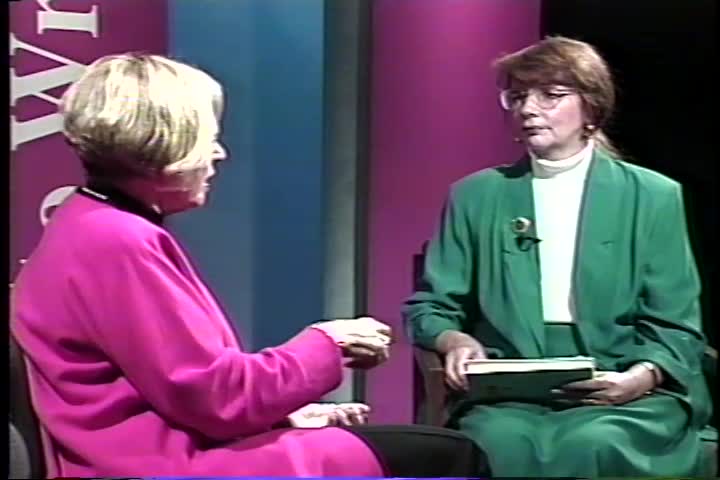 Title
Elaine Konigsburg: Writing Children's Literature.
Abstract/Description
Elaine Konigsburg, Newbery Award winning author, discusses two of her books, The View from Saturday and Talk, Talk: A Children's Book Author Speaks to Grown-Ups. E. L. Konigsburg discusses how many of her books deal with the theme of identity and how she develops the ideas for her stories. Ms. Konigsburg also discusses some of the major changes she has seen in children's literature since writing her first book. Episode #: ?
Date Issued
1997
Identifier
ElaineKonigsburg, fscj:13514
Format
Video file 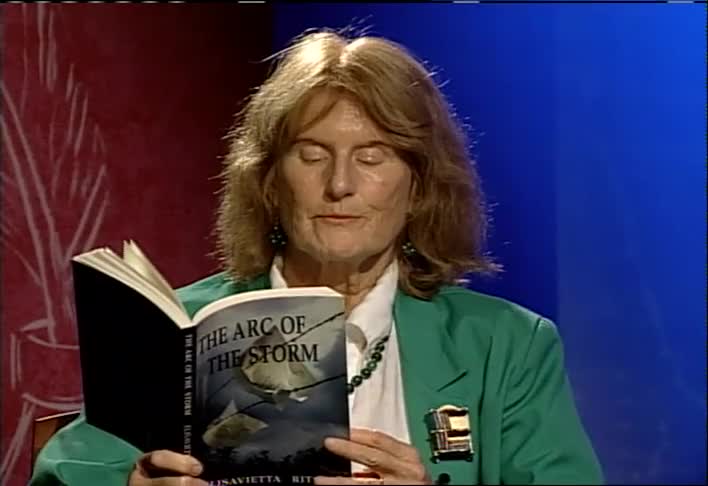 Title
Elisavietta Ritchie: Speaking for Those Who Have No Voice.
Abstract/Description
Author Elisavietta Ritchie reveals how her multicultural and multi-lingual childhood inspired her career as a writer. She discusses her collections of short stories such as In Haste I Write You This Note. She also read aloud from her works The Arc of the Storm and Elegy for the Other Woman. Episode #: ?
Date Issued
2001
Identifier
ElisaviettaRitchie, fscj:13511
Format
Video file 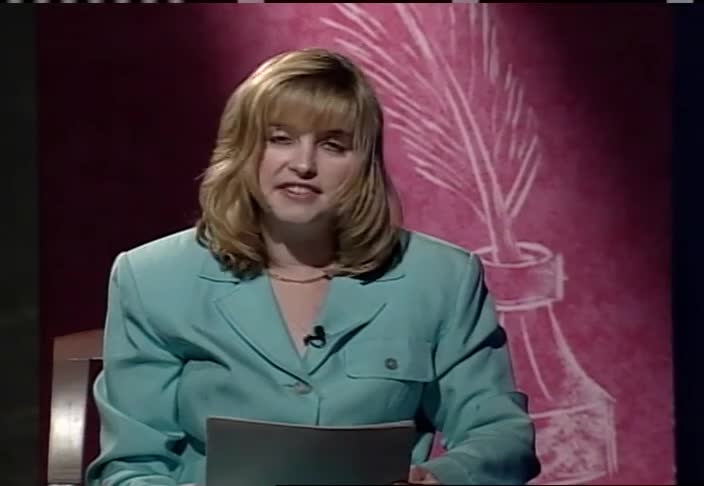 Title
Elizabeth Lund: Seeking Emotional Truth.
Abstract/Description
At the time of this interview, poet Elizabeth Lund worked as the Poetry Editor for Christian Science Monitor. She discusses her job working with poets and the publishing industry and reads aloud and discusses selections of her own poetry. Episode #: 27 (? number on case)
Date Issued
2001
Identifier
ElizabethLund, fscj:13512
Format
Video file 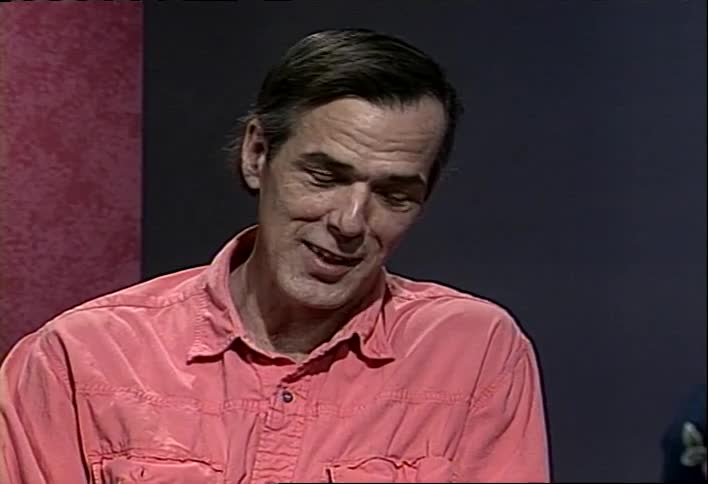 Title
Frederick Park: Telling the Story.
Abstract/Description
Frederick Park discusses the craft of storytelling, the art of the joke, and how he transitioned from farmer and orchardist to storyteller in order to preserve the culture of Appalachia. Park asserts that oral stories are living and adaptable, allowing the storyteller to develop a rapport with various audiences and tells two comedic tales during the interview. Episode #: ?
Date Issued
1997
Identifier
FredPark, fscj:13515
Format
Video file 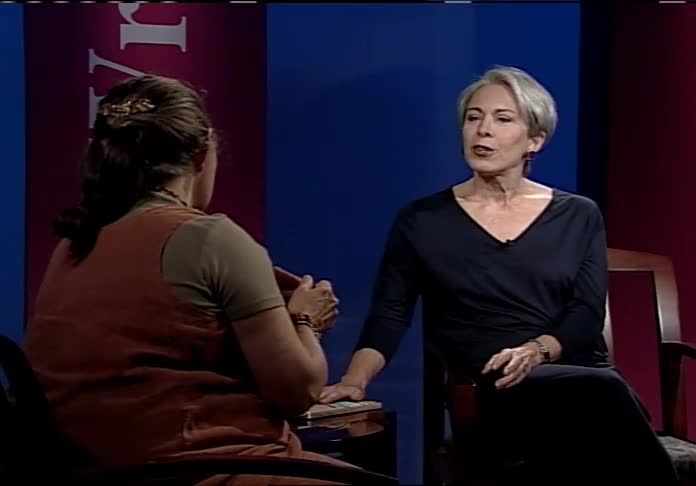 Title
Gail Galloway Adams: Character and Characters - Cover to Cover.
Abstract/Description
Gail Galloway Adams discusses her inspirations for the short story The Purchase of Order, Winner of Flannery O’Conner Award for Short Fiction. She elaborates on her method of character development and techniques she uses when she has writer’s block. She also gives advice to aspiring writers concerning creative methods and finding partners in the literary community.
Date Issued
2002
Identifier
GailGallowayAdams, fscj:13516
Format
Video file