Welcome to the Voices of College Composition Collection.

Please click the image thumbnail below to see all issues from this publication.

In April of 1991, the College’s Communications Department launched Voices of Freshman Writing, an annual publication featuring works by composition students at South Campus nominated by their professors and then selected by editor Joanne Metzler. Metzler, a FJC alum who had worked on The Experience during her time as a student, selected fourteen pieces for the inaugural issue, among them one student’s stirring account of creating a memorial panel for a friend on the AIDS Quilt and another’s impassioned argument for the social and poetic value of hip-hop.

Initially intended as a recruitment and retention tool, most of the published copies of Voices were distributed by Dean of Communications Charles Smires to English teachers in the Duval County Public School system to give high school students a better idea of the type of writing required in college courses, with remaining copies going to College faculty for a use as a teaching resource or to common areas on campus such as the library or cafeteria. By its second issue, Voices already included a segment called Voices Across the Curriculum which highlighted writing by students in non-English courses; by 2004, the cross-departmental nature of the publication, now also open to submission by sophomores, was reflected in its rebranding as Voices of College Composition.

While the first issue was funded by the mini grant from the College’s Center for the Advancement of Teaching and Learning, the success of Voices earned it its own line in the Communications Department budget. Editors, who received a stipend for their labors, were initially chosen from staff in the Writing Lab, as working on the project helped them become more involved with English faculty. Metzler was followed by Wayne Haddock (1994-1995), Kathleen Ciez-Volz (1996-2000), and Suzanne Hess (2001-2010), all under the direction of Dean Smires.

The 20th Anniversary edition, which appeared only in an online format, coincided with the retirement of Dr. Hess from the project and Dean Smires from the College, bringing the run of Voices to a close.

This collection represents all but one of the published editions of Voices of College Composition. If you have information regarding existing copies of the 1996 issue not represented here, please contact Jennifer Grey at jennifer.grey@fscj.edu. 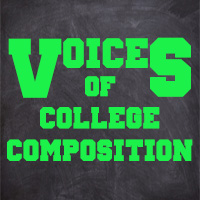