Welcome to the Commencement Programs collection.

Please click the image thumbnail below to see all available programs in the collection.

Florida Junior College held its first Commencement on Friday May 3, 1968. Almost 150 gray-gowned students accepted their diplomas from President J. Bruce Wilson in Jacksonville’s Civic Auditorium while the exhortations of the speaker, Florida Atlantic University President Dr. Kenneth Williams, still rang in their ears: “Each of you has ability, differing in kind and degree. Will you use it in dedication to making the world a better place, or will you allow it to become dissipated?”

In 1986, the College began hosting separate award ceremonies for graduates of the Adult Basic Education and its High School commencement. For organizational purposes, the programs for these events are included within this collection.

This collection represents programs from most, but not all, of the Commencements hosted by FSCJ between 1968 and the current year. If you have information regarding existing copies of programs not represented here, please contact Jennifer Grey at jennifer.grey@fscj.edu. 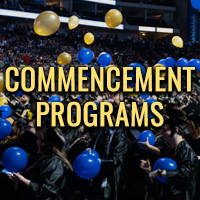