In 1987, Assistant Dean of Communications Jack Surrency hatched a plan for the College to sponsor a poetry contest. He gave the project to Professor Kevin Bezner, a former writer for The Florida Times-Union and faculty sponsor for The Campus Voice, who – with the help of Charles Feldstein, Mary Sue Koeppel, Bill Slaughter (UNF), and Mary Baron (UNF) - turned the contest idea into a writers’ festival at the Downtown Campus featuring talks by professional writers and workshops for attendees. The festival remained at Downtown for an additional year, expanding to include prose and becoming known as the State Street Poets and Writers Festival, before moving to Kent the following year. At the suggestion of Professor Howard Denson, the event was then rebranded as the Florida First Coast Writers’ Festival.

State Street Review began as a simple booklet of four to six pages featuring the winning pieces from the festival’s College-sponsored writing contests. With the switch to the more ambitious name and mission in 1990, the decision was made to expand the format of the Review into a literary magazine that would feature not only poetry but also fiction, drama, and free-lance articles. Howard Denson, who had by this time taken over running the Festival, taught himself PageMaker to lay out the first issue, which debuted in Summer of 1990 with help from Frank Green, Sohrab Homi Fracis, Michele Boyette, and John Hunt. The original goal was to publish quarterly, but the Review managed only two issues a year for its first two years before settling into an annual publication schedule in 1992.

Initially, the funding for both the Writers’ Festival and the State Street Review came from proceeds generated by writing contests sponsored by the event. At one time, organizers were running eleven concurrent contests in adult fiction, adult poetry; senior fiction, senior poetry; student fiction, student poetry; poetry in a second language (French or Spanish); song lyrics; plays; and novels. When the College provided $10,000 in funding in support of the festival at the State Street Review, the contests were limited to a more manageable number and focused on poetry, short fiction, novels, and plays. State Street Review ceased publication in 1998, when funding dried up.

If you have information regarding additional copies of the State Street Review not represented here, please contact Jennifer Grey at jennifer.grey@fscj.edu. 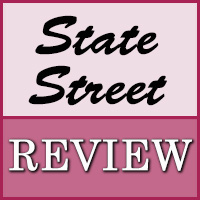